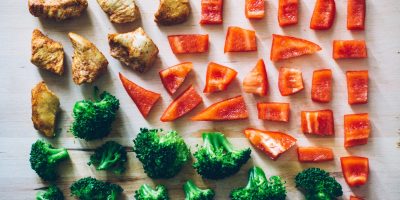 Paleo diet dishes involve concepts like “Pizza Soup” and “Pumpkin Chili,” which sound intriguing until you realize they are just carbohydrate-free versions of already-perfect foods. The fad diet, which is supposed to mimic the eating habits of paleolithic humans, is characterized by its lack of carbs and excess of raw plants and vegetables. But all that starchy goodness may have been cut in vain: New research on actual paleolithic teeth shows that carbohydrates were definitely on the menu.

In a new paper, published in the journal The Science of Nature, researchers examining the molars of a 1.2 million-year-old hominin dug up in northern Spain report traces of starchy carbohydrates in the individual’s teeth. By examining the microfossils within its dental calculus — another word for the plaque that builds up around the teeth — the researchers found evidence of starchy carbohydrates from two plants. One of those plants is thought to belong to the tribe Triticeae — which also includes some of modern Sapiens’ favorite carbs, like wheat, barley, and rye.

The dental plaques, the researchers write, is “the earliest direct evidence for foods consumed in the genus Homo.” The hominin whose teeth they’d pilfered had been unearthed in Sima del Elefante (Pit of the Elephants), Atapuerca, Spain, in 2007, and the team had extracted one of its molars; from this single tooth — and the tiny fossils of bacteria and other living material found in its plaque — the researchers also concluded that the early human also ate plenty of raw protein and plants.

In that sense, Paleo diet enthusiasts didn’t get their facts completely wrong: Their emphasis on eating raw food is consistent with the researchers’ finding that “all food was eaten raw, and there is no evidence for processing of the starch granules which are intact and undamaged.” The more important question, however, is whether the premise that Paleolithic diets are more appropriate for human nutrition, because they have not changed much over millennia, is actually true. According to study lead author Karen Hardy, Ph.D., the evolution of salivary amylase — the enzyme modern humans use to break down starchy food — coincided with the development of cooking in prehistoric humans, so it’s clear that our species have made some adaptations since then. Still, it’s almost certainly true that human digestive systems aren’t equipped to eat highly processed fast foods, either; it’s unlikely that three generations — the amount of familial turnover there’s been since the first McDonald’s opened in 1940 — is enough time for new digestive functions to evolve.